Our series is around Beram the Student in the faculty of science who always accompanied by his monkey Shafika.

Beram is totally convinced by the importance of the plant of ( El Ennab) that is grown on the area of upper Egypt and Beram thought he could turn this plant to an enhancer .

But he falls in his graduation project continuously for four years as he is not having a proof for his theory and his experience is not yet tried on humans.

On the other side we have Taiseer Fahmy the Police man who is married from the daughter of his boss (Farouk).

Also we have Tawakol, a poor guy who is working as a dancer in the band of Saad El Soghayar, but he doesn’t like his work and he caused problems with the journalist Salma whom he admires but she doesn’t.
Tawakol is living in a local area in El mokattam with (Am Mahmoud) and his daughter Natasha.
(Am Mahmoud) is a friend of his dad and he was working with him in the circus when his dad died during a show. As being a thug, Habashy El Ninja that is hitting Tawakol each time they met down on the street.

At this time a gang comes to Egypt with their chief trouble maker (Al Hofy). Tayseer and Farouk is in charge of this gang.

Beram hits Twakol with his car and he faints, So Beram decided to take him home and to apply his theory on him while he is working on his lab Shafika has made a noise so Tawakol wake up horribly and left the house.
We will notice that he will massively run away and both of Tayseer and Beram could not catch him.

Tawakol started to notice the change of his body and his power, he also became able to fly and turned to a super hero.

Beram tried raising his efforts to know what Shafika added to the ingredients and finally he reach.
Beram decided to convince Tawakol of the new power and shape and abilities he has, and that he has to help people and rescue them while being in danger but in secret.

Tawakol for the first time is able to stand for Habashy and hits them all. Sareeh El fil discovered the issue behind the power of Tawakol and he threatened Beram to disclose his secret of El Ennab, unless Beram let Tawakol accepts that the idea to join his party (El Saraha Raha) and to be the representative.

In the other hand Sareeh El Fil will finance the experiments of Beram ,so Beram accepts the idea and actually convince Tawakol.

Tawakol then starts to help people under the name of the party and also tried to get closer to Salma through telling her news about El Ennab as he is a close friend to him.

The ministry of interior discomforted with the idea of El Ennab so they created the rumor of (The police super hero) who is Tayseer Fahmy that will face El Ennab.

They started to make a legendary marketing campaign for (The police super hero) and to publish fake photos fir him. As a result the shares of the party gets back and Beram was arrested and admits the secret of El Ennab and mention to Tayseer the weakness point of El Ennab which is the salt and water.

So Tayseer got an idea to arrest El Ennab through publishing fake news about terrorists that took a ship in the port, so when El Ennab hear about this news he fly to the port to save people, at this time they arrest him and put him in a large pool full of salt and water.

Beram heard about the criminal act that Sareeh El fil will do, he told Tayseer to take the proper actions but Tayseer doesn’t believe him until the misery started and rocks started falling down, and then Tayseer knows that Beram was true and them Farouk refused to follow Beram.

Finally, Tayseer tries to help Beram and El Ennab to save people from their misery by this end El Ennab becomes the only real super hero. 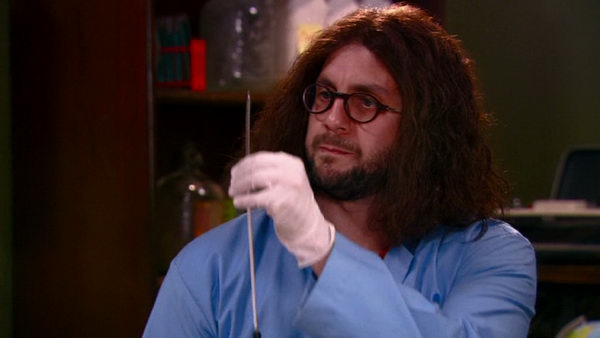