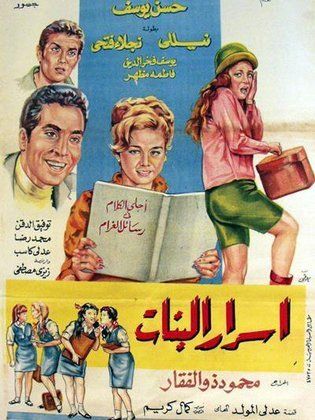 Four ladies are close friends, the first is Mona who is being followed by Ahmed everywhere she went, his boss decided to fire him because of always being absent, but he is no need to work for being rich.
Mona’s parents are being separated along ago, she went to her mother but her stepfather is not happy with her being with them, so she left and went to her father where her stepmother do the same as her stepfather, so finally she decided resorting to Ahmed who offered her a solution to stay at his house after promising that he will be having good attitude with her.
But unfortunately Ahmed’s father the rich man has no work and he is totally having leisure, he has a sexual aggression with Mona but Ahmed saved her in the proper time.
The second one is Elham who is having a sick mom who medicine and they have no money so she has to steel the pendant of her friend Nany to get money.
Her father is always being drunk, on day when is back home he was being hit by a car and he decided to repent.
The third is saneya who is living with her father the butcher ( El Mallem Deareb) , her neighbor loves her and he is the friend of Ahmed . He went to her father asking him to marry Saneyya but he refused.
The Fourth is Nana the careless lady .
Mona advised Ahmed to be self-independent without any help of his father. So he decided to establish a hotel named ( Fondoq Al Ahlam) .
One day there was a school trip so Ahmed offered to have a stay in his hotel instead, after that the hotel owner who was supposed to be the stay place of the girls told the school supervisor that the girls didn’t come yet.
The news of the girls’ absence reached their families and they went to the desert to find them, also one of them was trying suicide but they helped her in last moment.
Finally all of Zaki & Elham, Ahmed & Mona, Samir &Saneya got engaged.