Egyptian intelligence officer Khaled Sabri Abu Alam is chosen to work on this case Egyptian spy Salem Al-Husseini Who went by himself to the Israeli Mossad in a European country opposed recruiting himself  For Mossad after leaving Egpt for being dishonest lawyer accused of selling the country’s properties for some purchasers.

After being examined from El mosad he is been passed and became one of them , his mission was to recruit the Egyptians & Arabs who are living in Euroupe and to be intermediate between them. Hence, the Egyptian officer Khaled seeks to put a decoy  that seems like a precious hunt in Salem’s way to follow him and catch all the  cell members in Egypt and its members abroad

Accordingly ,Omar Salah was been chosen for this mission as for being smart , intelligent  and qualified technician to camera installations and having an appealing character as well .

n the human side Omar was been divorced and has a single child named Ali who is living with his mother Hayat and step father Othman Beh who is prosperous and capable to let Ali reach all his dreams which made Omar to always be in a continuous conflict with himself because he feels always inferiority ,so it was a chance for Omar to proof to his child that he is a responsible and important person and that Ali has to be proud of his dad.
Omar is put in severe psychological conditions and a series of tests before being recruited to make sure of his patriotism and after being recruited to make sure that he is patient and able to have psychological and physical endurance for what he may be exposed to when discovered by the Israeli Mossad  .

– Omar is sent to Greece and was put on Salem way. This is how events are escalating and relations are intertwined in open game between intelligence services in the two countries. Until Mosad is been convinced that Omar is a luxury hunt and that was evolving in a series of conflicts between two systems in Greece until the end of part one . 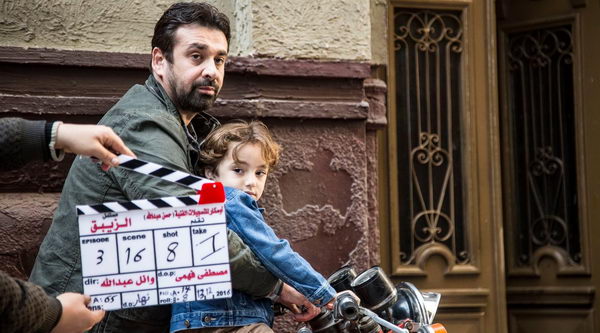