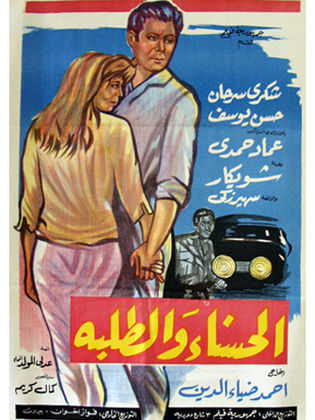 Metwally is a countryside guy, he is married to Samira with having a son who is Elewa, he travelled to Cairo to proceed his study in the faculty of law.
Metwally reach his uncle’s house (Afify) he also met his cousin (Kamal) who helped him in his accommodation.
Nana the beautiful lady asked Dr Galal (Professor in faculty of law ) to give the one who will be having the highest grades a ten pounds gift and he already gave it to Metwally who get the highest grades .
So Metwally asked his father not to sell the cow they have because he got money.
He went to the place where Nana is working to thank her for her favor without knowing what is the work she is having there, once he entered Esh El Bolbol he noticed a man who is attacking her so he fights for her without knowing that she is Nana,this attitude attracts her deeply from a new guest and she was more happier when she knows that this guy is Metwally who get the ten pounds gift. She insisted to stay this night together and finally he got drunk and lose control, after that they have to get married.
After getting married, Metwally was always there with his wife which greatly discomforts the night club owner who finally decided to let him sell cigarettes for guests. Metwally by time gets more jealous on Nana to the extent that he left his study, Kamal told his family about the misery case which he   reached, so his first wife came to the night club but Nana met her badly and then she left back to the country again.
Dr Galal went to Nana and asked her to get away of him, she finally accepted and she started the way how to let Metwally hate and divorce her,
his jealousy raised, so one day he had a clash with her when she quickly ran outside to have a car accident and she died before letting him know that she really loves him